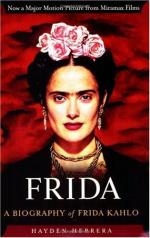 Hayden Herrera
This set of Lesson Plans consists of approximately 147 pages of tests, essay questions, lessons, and other teaching materials.

2. Who did Kahlo dance with at a party in Detroit, who was famous?

3. Who did Kahlo's father meet while working in the jewelry store?

4. What was the strongest reason that Kahlo is permitted to attend such an impressive school as the National Preparatory School?

5. What is the color of the house where the story of Frida Kahlo's life begins?

1. Why did many of Frida's friends see her bus accident as destiny?

2. Who was Leo Eloesser, and how did he help Frida?

3. What was one of the key reasons for Frida and Rivera's success in their eventual marriage?

4. Who was a member of Frida's close group of friends, the Cachuchas, and what did they do together?

6. How did Guillermo treat Frida compared to his other daughters?

7. How was Diego Rivera described in Chapter 3?

8. After leaving Detroit and returning to New York, what did Rivera begin to do?

9. What happened to Frida's family during the Mexican Revolution?

10. How were Frida and Rivera married in Chapter 8?

Frida' father Guillermo Kahlo, had an important impact on Frida and when recalling her life she always fondly remembered her father. Analyze Frida's father, Guillermo, and examine how he affected Frida. How did Frida and Guillermo feel about each other? Why was Frida Guillermo's favorite daughter? How did Guillermo meet Frida's mother? What did Guillermo encourage Frida to do? What was Guillermo's profession and how was it affected during the Mexican Revolution? How was he affected?

More summaries and resources for teaching or studying Frida, a Biography of Frida Kahlo.