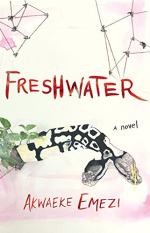 Objects & Places from Freshwater: A Novel

Akwaeke Emezi
This set of Lesson Plans consists of approximately 140 pages of tests, essay questions, lessons, and other teaching materials.

This object symbolizes Ada's commitment to Yshaw, particularly within her childhood and adolescence. When Ada tells Soren that she has vowed to protect her virginity until marriage, Soren appears to be supportive, but then proceeds to drug and rape her in order to get his way regardless of Ada's beliefs. Therefore, this object represents Ada's growing understanding that her reliance on Yshaw may not be enough to protect her from harm.

This object symbolizes Ada's innocence at the time of the masquerade ceremony. Wearing this object over her face as she joins the wildly dancing group of people, Ada feels free. She later remembers this event as one of last few happy moments within her childhood. After the ceremony, during which The We awaken inside of Ada, there are three brown spots on this object, representing Ada's inhalation of the awakened We during the...