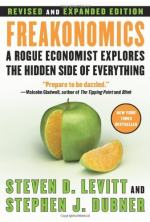 Steven Levitt
This set of Lesson Plans consists of approximately 124 pages of tests, essay questions, lessons, and other teaching materials.

This criminologist incorrectly predicted a major rise in violent crime in the mid-1990's.

This CEO of the Chicago Public Schools commissions a study to determine if the teachers in his city are helping students cheat.

This character makes an astonishing transition from juvenile delinquent to Harvard professor.

This risk consultant produces a study that explains why people are more afraid of flying than driving.

This character infiltrates the Ku Klux Klan and reveals their secret rituals, names, handshakes, and hierarchy.

This individual is a homeless advocate fabricates research into homelessness in America.

This is a prominent drug-dealing gang...