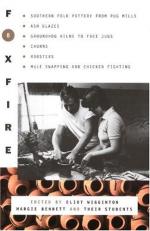 Eliot Wigginton
This set of Lesson Plans consists of approximately 146 pages of tests, essay questions, lessons, and other teaching materials.

1. What is Anna Tutt's marital state?
(a) She is divorced.
(b) She is engaged to be married.
(c) She is single and has never married.
(d) She is widowed.

3. Why don't Mountain City residents want to build something that would draw increased tourists to their community?
(a) They don't want more traffic, noise or fast food restaurants.
(b) They don't like outsiders visiting them.
(c) They want to tear down the town and move elsewhere.
(d) They want more factories instead.

4. What is the name of the county seat of Eliot Wigginton's county?
(a) Clayton.
(b) Cynthiana.
(c) Rabun Gap.
(d) Marietta.

5. What type of glaze is made of silt ashes and sand or powdered glass and water?
(a) New England varnish.
(b) Shanghai glaze.
(c) Albany slip.
(d) Canton glaze.

1. From what material was the Mountain City town water fountain made?

2. What was the educational level of Viola Lenoir's mother?

3. What shape kiln is common in the South?

4. To where would Carrie Stewart walk barefoot in the mud as a child?

5. From what material were the Mountain City hotels constructed?

1. What training did Carrie Stewart engage in at the age of seventy-four?

2. What changes has Anna Tutt noticed in children and families during her life?

3. How does Bruce Mosley feel about racial discrimination today?

4. Why does the Mountain City community not want to draw more tourists into their town?

5. What kind of education did Viola Lenoir's grandparents have?

6. What are some misconceptions about folk pottery that John Burrison discusses?

8. What famous couple does Arie Meaders think once purchased her pottery?

9. How does Mountain City today differ from how it appeared in the early 1900's?

More summaries and resources for teaching or studying Foxfire 8.