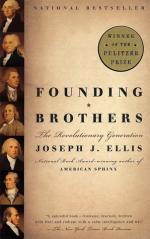 Joseph Ellis
This set of Lesson Plans consists of approximately 134 pages of tests, essay questions, lessons, and other teaching materials.

• The author describes the formation of the new republic of the United States of America, and how a combination luck, happenstance and good fortune accompanied the timing and the resources of the country at its beginning. There are two points of view held by historians regarding the formation of the country, and the author contends that the creation of the USA occurred suddenly rather than gradually, and specific decisions by specific people were critical to its success.
• Although there have been many successful colonial uprisings around the world since the American Revolution, none had happened before, and there are many reasons why the USA succeeded where none had before. A brief exception was Rome's Republic of Cicero, but it did not last. The author describes all the USA had in its favor at the time of the revolution, especially a young vibrant population and a vast continent...