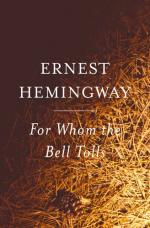 For Whom the Bell Tolls Test | Final Test - Hard

1. Robert Jordan begins to think that they all will be killed, but what will succeed?

3. What does Robert Jordan NOT believe in?

4. Where does Pablo speak of going as they prepare to leave the camp?

5. What does the Spanish officer tell Karkov's wife about the offensive?

1. What does Robert Jordan think Pablo's return is a sign of?

2. What does Robert Jordan wish he could talk to his grandfather about and hopefully receive some advice? What does he realize as a result of his thoughts?

3. Describe what Maria believes about the love between her and Robert Jordan, even as Robert Jordan grows more and more realistic about the outcome of the day.

4. How does Robert Jordan feel about Anselmo and Agustin now that they are in the center of war?

5. Do the men trust Robert Jordan now, even after the tragic event at Sordos has occurred?

7. When Robert Jordan thinks of the bridge now, what does he feel?

8. What do Robert Jordan and Pablo discuss as they load the horses and prepare to leave?

9. What do the new men mistakenly think Pablo's role is in the mission?

10. What does Robert Jordan's dispatch to General Golz say?

Discuss the character of Andres. Discuss his loyalty to the group during a time of uncertainty. He is racing time trying to get the dispatch to Golz. Discuss this character in terms of his purpose in the story and the suspense he carries with him as makes his way with Miranda's orders to Golz.

Discuss salvation. What does it mean to be redeemed? Is redemption something that is bestowed upon you or do you rely on the mercy of others to provide salvation? Use Maria's personal story as your example. Use evidence from the text.

Discuss the process of timing as Andre Marty, Karkov, and Duval make their way (or stand in the way) of the dispatch getting into the hands of Golz. In what ways are the men doing their jobs and in what way are they thwarting the mission? Are their characters believable? If the men have gone against the mission, describe their motivations in doing so. Bring in their culture and power to discuss their motivations.

For Whom the Bell Tolls from BookRags. (c)2022 BookRags, Inc. All rights reserved.