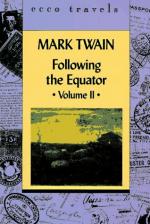 Following the Equator: A Journey Around the World Chapter Abstracts for Teachers

Mark Twain
This set of Lesson Plans consists of approximately 105 pages of tests, essay questions, lessons, and other teaching materials.

• Twain took a long trip on a ship that went along the equator as part of his lecture circuit.

• The captain was a nice man who did not smoke or allow others to smoke past 11:00 p.m.

• He had steered another ship into some rocks, and there were rumors surrounding the incident.

• The purser was an alcoholic Scotsman. Twain talked about desire being the root of all habits good and bad.
• The Maharajah of Mysore provided entertainment with a memory game. He was a Brahmin and memory expert.

• They were unable to go on land at Honolulu because of a cholera outbreak. Twain was disappointed as he loved Hawaii.

• They played shovel board as they neared the equator. Twain won a watch in one match.

• The passengers liked to look at the constellations at night. Twain enjoyed a Scottish accent.

More summaries and resources for teaching or studying Following the Equator: A Journey Around the World.

Following the Equator: A Journey Around the World from BookRags. (c)2021 BookRags, Inc. All rights reserved.