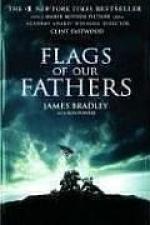 4. What was Ira Hayes's nickname in the Corps?
(a) Mike.
(b) Laughing Easy.
(c) Flying Horseman.
(d) Chief Falling Cloud.

5. Who signed Harlon Block's enlistment papers?
(a) He faked his father's signature.
(b) His brother.
(c) His mother.
(d) His father.

1. Who came to confer with Generals of the 5th Marine Division while it was training?

2. What war did John Bradley's father participate in?

4. How long did the bombing of Iwo Jima last before the invasion began?

5. How many Marines were killed on D-Day on Iwo Jima?

1. What did Kathryn, James's mother, always rely on according to "Chapter Two: All-American Boys"?

3. How long had the battle of Iwo Jima raged, and how was the battle described?

4. What was Japan's strategy in attacking the U.S. in Pearl Harbor?

5. What did American leaders not know about the Japanese soldiers on Iwo Jima before they landed on the island?

6. What was ironic about Company E according to "Chapter Five: Forging the Spearhead"?

7. What did Bradley always wonder?

8. What did Jack think when he decided to join the Navy, and what did he not know?

9. What did the armada heading for Iwo Jima consist of according to "Chapter Six: Armada"?

10. What did the Battle of Tarawa foreshadow?

More summaries and resources for teaching or studying Flags of Our Fathers.

Flags of Our Fathers from BookRags. (c)2022 BookRags, Inc. All rights reserved.