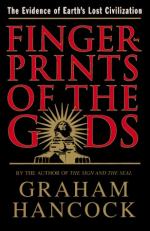 Graham Hancock
This set of Lesson Plans consists of approximately 111 pages of tests, essay questions, lessons, and other teaching materials.

1. How did Hancock view the lack of a site plan in Chapter 36?
(a) As an anomaly.
(b) As evidence that the Egyptians were not an advanced culture.
(c) As evidence of another culture's influence.
(d) As symbolic.

4. What was inside the Second Pyramid?
(a) An empty sarcophagus.
(b) Bone fragments.
(c) An embalmed mummy.
(d) Gold treasures.

5. What was displaced when the crust shifted?
(a) Migration.
(b) Vegetation.
(c) Exploration.
(d) An ancient civilization.

1. About how many blocks does the Great Pyramid have?

2. What is the only other pyramid in the world, besides the Great Pyramid, to use a variant on pi?

3. What did Christian Eusebius discover about Manetho's texts and the Bible?

4. In Chapter 36, what is a belief mentioned about the tombs?

1. What two aspects of the Great Pyramid remain a mystery?

2. Is it a coincidence that the Great Pyramid is an accurate scale-model of Earth's northern hemisphere?

3. Why did Hancock mention his researcher's resignation in Chapter 50?

4. Is Hancock's message in Chapter 52 justified, based on the book as a whole?

5. What accounts for differing ideas of when the Sphinx was built?

6. What is the obliquity of the ecliptic?

7. In Chapter 39, why do you think the Egyptians didn't cut the limestone into smaller pieces to make it easier to move?

8. In Chapter 38, how did the Egyptians manage to drill through granite without the necessary tools?

10. How did Hancock resolve the absence of any lost continent in Chapter 50?

More summaries and resources for teaching or studying Fingerprints of the Gods.

Fingerprints of the Gods from BookRags. (c)2022 BookRags, Inc. All rights reserved.