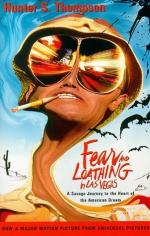 1. What is the bartender wearing at the bar outside Las Vegas where Thompson has stopped at the end of Part 1?
(a) Blue jeans and sweat shirt.
(b) A hippie dress.
(c) Shorts and halter top.
(d) A muu muu and overalls.

2. Why was a pharmacy owner arrested, according to a newspaper Thompson reads while waiting for his car in Chapter 1, Chapter 9?
(a) For private insurance fraud.
(b) For watering down prescriptions.
(c) For charging Medicare the wrong price.
(d) For having 100,000 pills missing.

4. How does Thompson think he might find out who won the Mint 400?
(a) Looking at the videos he took.
(b) Reading the L.A. Times.
(c) Getting the local Las Vegas paper.
(d) Calling his photographer.

5. Why does the attorney pull the car off the road in Part 1, Chapter 3?
(a) He wants something to eat.
(b) He is getting sleepy.
(c) He pretends the car is broken.
(d) He is pretending to have a heart attack.

9. What does Thompson say one should do if he is speeding and a police car turns on its lights behind you?
(a) Speed up.
(b) Stop suddenly.
(c) Slow down.
(d) Pull into the median.

10. What does Thompson see in the carpet at the first hotel bar in Las Vegas?
(a) His mother's face.
(b) Blood.
(c) Roaches.
(d) Pictures of Armageddon.

11. Why was Muhammad Ali sentenced, according to a newspaper Thompson reads while waiting for his car in Chapter 1, Chapter 9?
(a) For hitting a man on the street.
(b) For cheating in the ring.
(c) For refusing to obey the draft.
(d) For beating his wife.

12. What does Thompson tell his lawyer is the reason his lawyer should not come to the Flamingo?
(a) The Flamingo's rooms are too small.
(b) Thompson is not going to write anymore articles.
(c) He has left Las Vegas.
(d) Foreigners are not welcome there.

15. What does Thompson tell his lawyer they must do before dark in Part 1, Chapter 4?
(a) Call his house.
(b) Find a burlesque show.
(c) Try to earn some money at blackjack.
(d) Go to the Mint 400 racetrack.

2. Where do the journalists go after the race begins?

3. What does Thompson do to keep the hitchhiker from getting suspicious as to the men’s condition in Part 1?

4. What did Thompson decide to do after talking with the individual he gave as an example of long term drug use?

5. Why is the lawyer upset at the photographer sent for Thompson?