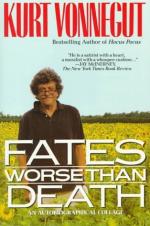 Kurt Vonnegut
This set of Lesson Plans consists of approximately 123 pages of tests, essay questions, lessons, and other teaching materials.

Part 1) What could be the cause(s) of the Vonnegut family's mental illness?

Part 2) How does Vonnegut's mother's suicide affect his life?

Part 3) How might Vonnegut feel about his own son's mental illness?

Part 1) Give a detailed example of proof that this belief could be true.

Part 2) Explain a similarity between Father's architecture career with this belief.

Part 3) How has this belief affected Vonnegut's own writing?

Vonnegut is continually unhappy with Christianity throughout the book.

Part 1) Give examples of the behavior of Christians mentioned in the book that would strengthen this attitude towards Christianity.

Part 2) How do groups of Christians mentioned go against or change the meaning of the Bible?

Part 3) Although Vonnegut is not a Christian, he spends quite a bit of time in churches. Do you...