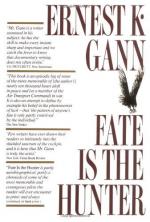 1. In Chapter 17, what new engines has Gann's DC-4A been outfitted with for his flight from San Francisco to Honolulu?

2. When Gann and his crew land in Greenland, what do they expect?

3. On one trip, Gann flies with Howe, his co-pilot. How does he view Howe?

4. Gann begins flying for a new airline run by a man named Nelson. Where does this airline fly?

5. What does Gann note "saved the day" when his Douglas C-54 has technical issues, causing a potentially life threatening situation?

1. How do the rescue planes keep track of where O'Connor's downed plane is located?

2. What does Gann recall about his actions when he sees a plane crash on the runway in Assam?

4. What does Gann learn kept his flight safe on the way from Honolulu to Burbank despite the fact that they were missing a critical piece of equipment?

5. Descibe Gann's sketchy takeoff scenario as he begins his flight on a C-54 for a long-haul mission.

6. Why does O'Connor's flight from Goose Bay crash-land?

8. What emergency causes Gann to have to land his plane on his flight from Steensville?

9. What is the weather situation during Gann's emergency landing back to Steensville? What does Gann do to land the plane?

10. What do the mechanics discover during their engine inspections that seem to be causing all the trouble on the DC-4?

Weather is a common theme in the novel. Why is weather so important in this novel? How does weather seem to affect Gann and other pilots? Give three examples of weather having an effect or being an important factor in the novel.

Choose one of the characters that Gann interacts with in the story and compare and contrast Gann and that character. What are their similarities (if any)? What are their differences? How do they differ as pilots and as people?

Fate is the Hunter from BookRags. (c)2022 BookRags, Inc. All rights reserved.