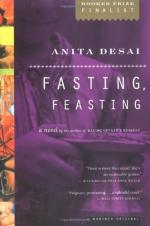 Anita Desai
This set of Lesson Plans consists of approximately 145 pages of tests, essay questions, lessons, and other teaching materials.

Write two letters from Uma to her brother and her parents that she would write near the end of Fasting, Feasting.

Create a list of actors to play the major characters and explain why you choose those actors.

Write a biographical paragraph about one of the major characters.

You are a journalist with People magazine. Write out an interview with Uma.

In groups have groups come up with a new title for Fasting, Feasting. Have the class vote on the best one.

Have the class write a brief plot that covers what happens the next five years in Uma’s life.

Design a Trivial Pursuit type game based on Fasting, Feasting. Choose six objects from the book to serve as playing...

More summaries and resources for teaching or studying Fasting, Feasting.