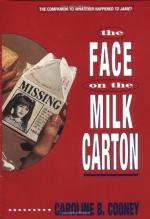 The Face on the Milk Carton Test | Mid-Book Test - Easy

Caroline B. Cooney
This set of Lesson Plans consists of approximately 115 pages of tests, essay questions, lessons, and other teaching materials.

1. In which chapter does Janie's relationship with her mother begin to unravel?
(a) Chapter nine.
(b) Chapter four.
(c) Chapter three.
(d) Chapter five.

2. What group does Hannah join, as stated in chapter nine?
(a) A religious cult.
(b) Alcoholics anonymous.
(c) A group of writers and philosophers.
(d) A traveling circus group.

3. In which chapter does Janie's relationship with Reeve begin to develop?
(a) Chapter two.
(b) Chapter four.
(c) Chapter three.
(d) Chapter one.

4. Which one of Janie's friends does she begin dialing to tell of her kiss with Reeve?
(a) Pete.
(b) Sarah-Charlotte.
(c) None.
(d) Adair.

5. What does Janie daydream about changing her name to?
(a) Jayne Johnstone.
(b) Jenny Johnstone.
(c) Jennie Spring.
(d) Janie Shields.

7. Where do the Sherwood, Shields and Johnson families go together, and enjoy a picnic lunch?
(a) Scenic Overlook.
(b) A college football game.
(c) The park.
(d) A high school football game.

8. Which of the following is not included in Janie's confrontation of her parents?
(a) Hannah.
(b) Missing baby photos.
(c) Why her parents do not allow her to get her driver's license.
(d) Her lack of birth certificate.

12. Which word best describes how Janie feels regarding moving forward with her relationship with Reeve?
(a) Hesitant.
(b) Excited.
(c) Prepared.
(d) Anxious.

13. In which chapter does Janie have her most vivid memory?
(a) Chapter four.
(b) Chapter two.
(c) Chapter nine.
(d) Chapter eight.

14. What happens in the flashback Janie has in chapter four?
(a) She is eating ice cream.
(b) She is hugging a strange woman.
(c) She spills milk.
(d) She is kidnapped.

2. What does Janie find her mother decorating when she returns to the house after kissing Reeve?

3. In which chapter does Janie eventually confront her parents about all that she uncovers?

4. Which word best describes Reeve in relation to the rest of his family, as stated within the novel?

More summaries and resources for teaching or studying The Face on the Milk Carton.

The Face on the Milk Carton from BookRags. (c)2022 BookRags, Inc. All rights reserved.