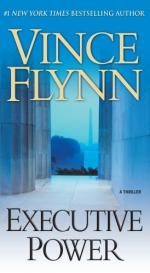 Vince Flynn
This set of Lesson Plans consists of approximately 146 pages of tests, essay questions, lessons, and other teaching materials.

1. Who tells Kennedy that Anna is asking questions about Rapp after he leaves for the Philippines?
(a) Secret Service Agent Watch.
(b) The head of the CIA.
(c) Another reporter.
(d) The president.

4. Who is Scott Coleman?
(a) A freelance for the CIA.
(b) An agent for a part of the government no one knows about.
(c) Rapp's brother-in-law.
(d) An old college friend of Rapp.

5. What does Rapp tell Moro when they finally meet in person?
(a) That he knows things about him even the Philippine government doesn't know.
(b) That he is going to die.
(c) That he has 10 minutes to confess his sins or the place will be bombed.
(d) That he is going to be taken to America for his own safety.

6. What kind of car picks up Rapp once he arrives in the Philippines?
(a) A black Continental limousine.
(b) An ATV.
(c) A Hummer.
(d) A boring-looking, generic sedan.

7. Who does Rizal conclude is the traitor after reading Rapp's materials?
(a) Rapp himself.
(b) Kennedy.
(c) General Moro.
(d) Anna.

8. What does Rapp decide about Moro's murder as he is talking to him?
(a) That it must look like a suicide.
(b) That he must do it himself because the hired assassin is late.
(c) That it should have happened a long time ago.
(d) That he is being framed.

9. Who does Rapp not want at his meeting with the president and Kennedy, in Chapter 9?
(a) Anna.
(b) The Vice President.
(c) Kennedy.
(d) Valerie Jones.

10. What does Rapp decide about his role with the rescue of the kidnapped family?
(a) That he will deal with the consequences later.
(b) That he will coordinate from the ship.
(c) That he must step aside for political reasons.
(d) That he will take part in it.

11. Who owns the airstrip where Coleman and his men are dropped off, in Chapter 17?
(a) A Japanese businessman.
(b) The Indonesian government.
(c) The Philippine government.
(d) The CIA.

12. What did Alan Church do before becoming a spy?
(a) He was a bank robber.
(b) He was a mechanical engineer.
(c) He was a veyr famous politican.
(d) He was a police officer.

15. Why does Rapp excuse himself from his meeting with Moro?
(a) His earpiece is malfunctioning.
(b) He gets sick.
(c) He hears fighting outside.
(d) His phone rings.

1. Whose finances is Church supposed to monitor?

2. Who discovers the site of David's secret meeting?

3. What is in the attache case that David is given, in Chapter 18?

4. What does General Hamza give to David?

5. Who flies Rapp away after Moro is killed?

More summaries and resources for teaching or studying Executive Power.