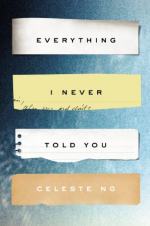 Objects & Places from Everything I Never Told You

Celeste Ng
This set of Lesson Plans consists of approximately 126 pages of tests, essay questions, lessons, and other teaching materials.

This is where the Lee family sometimes enjoyed family outings and where Lydia killed herself.

This is what James gave Lydia on her 16th birthday.

This belonged to Marilyn’s mother and represented everything that Marilyn did not want to be.

These were given by a mother to a daughter to keep secrets inside, but were never actually written in.

Footprint on the Ceiling

This was made when Nath tried to squash a spider with his father’s shoe.

This was taken by Lydia because she didn't want her brother to leave home.

These are something that Louisa makes that remind James of his heritage and cause him to speak Chinese for the first time in 40 years.

This is the day after Marilyn’s return and two months after Lydia’s death.

Everything I Never Told You from BookRags. (c)2020 BookRags, Inc. All rights reserved.