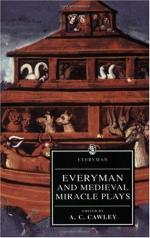 1. According to the Preface, why did A.C. Cawley choose the collection of plays that he did as a representative collection of medieval biblical pageants?

A.C. Cawley was very particular in choosing the plays that he believed would best represent medieval biblical pageants as a whole collection. Cawley based his decision to include the plays upon their intrinsic merit and they best represented the range and content of the English Corpus Christi cycle.

2. What error did Cawley correct in his Preface to the second edition of the text?