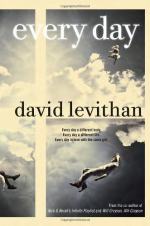 Every Day Chapter Abstracts for Teachers

• The following version of this book was used to create this Lesson Plan: Levithan, David. Every Day. Ember, 2012.

•The narrator wakes up and must adjust to the new day, and figure out who they are, where they are, and the context of the new body’s life.

• While the narrator remains themselves internally, each day they wake up in a completely new body.

• The narrator discovers that today, they are a boy named Justin.

• Justin’s room is messy, the floor littered with clothing, and “far more video games than books” (2).

• From the taste of his mouth, the narrator notes that Justin is a smoker.

• The narrator tests out Justin’s voice, which is low and, as always, different from the voice in their head.

• From what they can tell, every person the narrator inhabits is the same age as them, 16, though they are...

Every Day from BookRags. (c)2022 BookRags, Inc. All rights reserved.