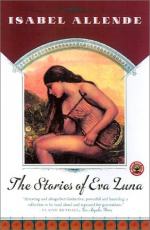 This person is a journalist who develops a skill for making documentaries that catch the attention of the masses and win him fame and fortune.

As a youngster, this character is a street urchin who has lived on the street since he was old enough to take care of himself. Eventually this character grows up to become a guerrilla fighter.

This character spent most of her young life in a convent until she dies after swallowing a chicken bone while celebrating Christmas.

Highly intelligent but focused, this character often misses what is occurring right under his nose. This character embalms bodies.