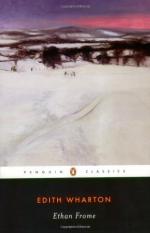 Edith Wharton
This set of Lesson Plans consists of approximately 137 pages of tests, essay questions, lessons, and other teaching materials.

1. Though Ethan's studies were brief, the author states that he became aware of
(a) Absolute truth and literal meanings.
(b) The several dimensions of life.
(c) The many levels of consciousness.
(d) Cloudy meanings behind the daily face of things.

1. What gives Ethan a sense of mastery at the end of the chapter?

3. How has Mattie changed her appearance for Ethan?

4. What spark in Ethan had not been completely extinguished by the Starkfield winters?