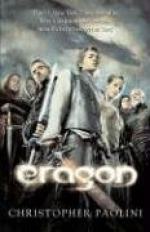 1. What is the last thing that Eragon has Saphira hide in his memories?
(a) Eragon's mother's name
(b) His feelings for Arya
(c) Murtagh's true identity
(d) The death of his uncle

2. What does the Shade ask Eragon for that Eragon doesn't know?
(a) Eragon's true name
(b) Eragon's mother's location
(c) The location of the Varden
(d) Saphira's location

3. What does Eragon realize when he wakes up in his cell?
(a) He is drugged
(b) He has been in this cell before
(c) Saphira is close by
(d) He has been badly injured

4. Who doe Angela say is the biggest threat to the Varden at that moment with the exception of Galbatorix?
(a) The commander of the Kull
(b) Uncertainty
(c) The Ra'zac
(d) Durza the Shade

5. What does Eragon find on the elf's body while trying to heal her wounds?
(a) Galbatorix's name on her back
(b) Prison ink
(c) Tatoo on her shoulder
(d) The mark of the unforgiven

1. When Murtagh becomes angry what does he accuse Eragon of doing to other people?

2. What does Brom point out and state was the reason that Dras-Leona was built?

3. What does Eragon find when he enters small towns after leaving Dras-Leona?

4. What does Eragon think he will see when he tries to call forth a picture of the woman he has seen in his dreams?

5. When Murtagh and Eragon are surrounded while traveling to the Varden what do they men that try and capture them want?

1. What do Eragon and Murtagh argue about when discussing ways to escape those foiling them in the chapter "Water from Sand?"

2. When Eragon and Saphira first enter the Hadarac Desert what does Saphira tell Eragon about the desert?

3. In the chapter "The Mourning Sage" what does Eragon dream?

4. Describe the magical test that the Twins put Eragon through.

5. As Eragon, Murtagh, Saphira and the elf are beginning their journey to the Ramr River what thoughts does Eragon have in regards to returning home to Roran?

6. Why is Brom concerned about Galbatorix coming to Dras-Leona?

7. What does Eragon learn from the Ra'zac that capture him and Brom outside of Dras-Leona?

8. Describe Murtagh's prison cell and how he is treated when Eragon goes to visit him.

9. What happens when Eragon is approached for a blessing of an orphaned child?

10. Explain Eragon's reaction when he is able to call forth an image of the young girl he has been seeing in his dreams?