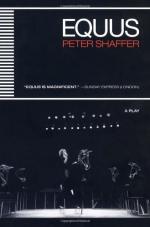 Peter Shaffer
This set of Lesson Plans consists of approximately 96 pages of tests, essay questions, lessons, and other teaching materials.

Have students create their own version of what they think Nugget/Equus looks like. This can be a head that might have been used in the play or it might be something that's used simply as a picture version.

Have students choose their own songs from television commercials and sing them to each other in response to questions.

Have students choose a scene to act out before the class. If possible, try to act out as many scenes as possible

A Day in the Stable

Have students come up with a list of tasks that might be done in a stable, from research they might do off the internet or by talking to a real life stable hand.

The Notes of Dysart

Have students create a session or two's worth of progress notes as a psychiatrist would for Alan...