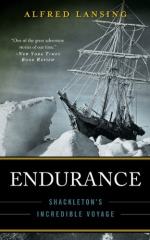 1. What experience does Shackleton have as an explorer?

He has been on several polar expeditions before. He was a part of an expedition led by Robert F. Scott and he also led another expedition. The expedition that the story is based on is Shackleton's third Antarctic voyage.

2. How does Shackleton pay for his expedition?

3. What are the men like that Shackleton takes with him as the crew?

Many of the most-important positions are filled by men with whom Shackleton has previous polar experience; men he can intimately trust and who are unquestionably reliable. The men picked by Shackleton are almost without exception reliable and well suited for the tasks required of them. Most of the men are about Shackleton's own age and concise biographies consisting of but a sentence or two are offered for many of the men.