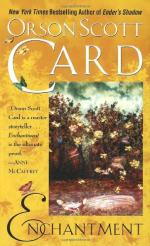 Katerina and Ivan's problem regarding the bridges and their mortality is valid. In essay form, discuss the argument they had about the bridges and some problems that their children might have in either world as a result of having been children of both.

Although Bear initially went to kill Ivan, he seems to have had a change of heart once Ivan frees him. Discuss this change of heart, and Bear's actions afterwards, and what this suggests about not only his desire to kill Ivan, but also about his relationship with Yaga...