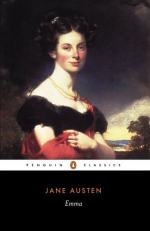 Jane Austen
This set of Lesson Plans consists of approximately 150 pages of tests, essay questions, lessons, and other teaching materials.

Write a love poem from Emma to Mr. Elton as though she is writing on behalf of Harriet. Have the poem reflect the emotions Emma hopes Harriet has for Mr. Elton.

Write a riddle similar to the one Mr. Elton leaves for Emma that Emma believes is intended for Harriet.

Write a letter as though you are Harriet and you are attempting to decline Mr. Martin's marriage proposal. Make sure to write the letter in a proper fashion, wording it in such a way that will help prevent further hurt on Mr. Martin's part.

Mr. Churchill and Emma play a game with tiles in the novel. Create lettered tiles of your own out of cardboard or small blocks of wood. Create a game with these tiles in which players must unscramble simple words. Create a...