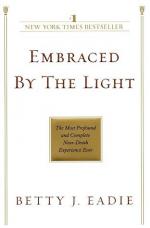 Betty Eadie
This set of Lesson Plans consists of approximately 142 pages of tests, essay questions, lessons, and other teaching materials.

1. This book is about a:
(a) Drug-induced hallucination.
(b) Near-death experience.
(c) Religious conversion.
(d) Malpractice suit.

2. At the opening of the book, Betty Edie is in the hospital for:
(a) A nervous breakdown.
(b) A surgical procedure.
(c) Flu complications.
(d) Psychiatric care.

5. What treatment is Betty about to have as the story opens?
(a) Partial hysterectomy.
(b) Electric shock treatment.
(c) Immune system therapy.
(d) Art therapy.

7. After her parents separate when Betty is four years old, where is she sent?
(a) Grandmother's house.
(b) Boarding school.
(c) Orphanage.
(d) Foster home.

8. When she was deathly sick with whooping cough and double pneumonia as a child, Betty had an otherworldly experience of finding herself cradled in the arms of:
(a) Two radiant fairies.
(b) A woman with a sparkling blue dress.
(c) A man with a beautiful white beard.
(d) Three golden angels.