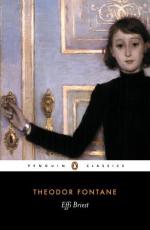 Theodor Fontane
This set of Lesson Plans consists of approximately 112 pages of tests, essay questions, lessons, and other teaching materials.

This quiz consists of 5 multiple choice and 5 short answer questions through Chapters 4-5.

1. Which of the following descriptions is NOT used to describe Effi?
(a) Graceful.
(b) Kind.
(c) Comedic.
(d) Sensible.

2. What worries Hertha about Effi's engagement?
(a) That it is not an equal match.
(b) That it has happened so quickly.
(c) That Hertha is not getting married first.
(d) That Effi will get her heart broken.

3. What does Effi's father suggest that makes her mother call him "incorrigible"?
(a) That he'll have to go to the poor house.
(b) That Effi should have a nicer dress than the one she picked out.
(c) That Effi have a honeymoon.
(d) That he can't afford to pay for a wedding.

5. To which event does Effi invite Dagobert?
(a) Her birthday party.
(b) Her wedding reception.
(c) Her wedding eve.
(d) Her engagement ball.

1. Who does Effi say will suffice for her husband?

2. What office does Innstetten hold?

3. What does Effi's father imagine Innstetten will drag his daughter to see?

4. Three days after the wedding, where does a postcard arrive from for the Briests?

5. Where does the von Briest family home stand?

More summaries and resources for teaching or studying Effi Briest.