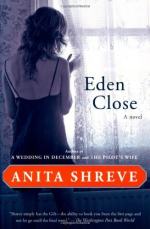 Anita Shreve
This set of Lesson Plans consists of approximately 123 pages of tests, essay questions, lessons, and other teaching materials.

1. Why does Andrew say he wants to go out on T.J.'s deck while they are eating dinner?
(a) He wants to check out the view.
(b) He needs some fresh air.
(c) He's freezing.
(d) He sees the gas grill smoking.

2. Why is Andrew obsessed with Edith's house in the last chapter?
(a) He wants to keep it in Eden's family.
(b) He wants to make a lot of money off it.
(c) He hopes he can live there someday.
(d) He wants to transform it.

5. Who told DeSalvo the story about the night of the shooting after Edith tried to kill Eden for the second time?
(a) Andrew.
(b) Edith.
(c) T.J.
(d) Eden.

6. What kind of restaurant does Andrew usually eat lunch at during his work week in New York City?
(a) Italian.
(b) Sub shop.
(c) French.
(d) Thai.

9. When Andrew leaps up off the bed when he is in Eden's bedroom, what does he intend to do?
(a) Flip over the bed for protection.
(b) Tackle Edith.
(c) Cause a diversion.
(d) Stop the direction of the bullet.

11. What does Andrew apologize to T.J. for when they are fixing up Edith's house?
(a) Believing he was in love with Eden.
(b) Thinking he had been the one to shoot Jim.
(c) For acting rudely at T.J.'s house.
(d) Believing he knew who the intruder was.

13. Where did Edith keep the gun after Andrew's father died?
(a) Laundry room.
(b) Bedroom.
(c) Kitchen closet.
(d) Basement.

14. What was Andrew surprised not to find in Edith's dresser drawer?
(a) Valentine from Jim.
(b) Money.
(c) Family history.
(d) Mementos of Eden.

1. Where does Andrew say the bullet from Edith's gun landed in Eden's bedroom?

2. Why does Eden tell Andrew not to bring her anything in Chapter 4?

3. When Eden asks what she looks like now, how does Andrew describe her skin color?

4. Where did police look for a murder weapon, according to Andrew's farmer neighbor?

5. Once Andrew persuades Eden to leave the house, what does he realize she is missing?