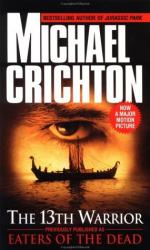 Eaters of the Dead: The Manuscript of Ibn Fadlan Fun Activities

Michael Crichton
This set of Lesson Plans consists of approximately 142 pages of tests, essay questions, lessons, and other teaching materials.

As a television reporter, provide a detailed report of the final battle with the wendol.

Have everyone bring in pictures cut from magazines that illustrate their idea of what Ibn, Herger, Buliwyf, Rothgar, the wendol, Wiglif, Wulfgar, the wendol's mother, and Wyglif look like.

Create a trivial game based on Eaters of the Dead. Have the categories involve items from the book, such as weapons, primitive man, the Vikings, Islam, and early gods.

Play the trivia game in groups with the winner of each group competing against each other for class champion.

Eaters of the Dead: The Manuscript of Ibn Fadlan from BookRags. (c)2021 BookRags, Inc. All rights reserved.