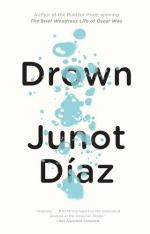 Related Topics
How to Date a Brown Girl (Black Girl, White Girl, or Halfie)
Ysrael
This Is How You Lose Her
Alma
The Cheater's Guide to Love
Drown (Short Story)
Monstro
Wildwood

Junot Díaz
This set of Lesson Plans consists of approximately 87 pages of tests, essay questions, lessons, and other teaching materials.

2. What drug are the narrator and his girlfriend on while they watch TV?
(a) Cocaine
(b) Speed
(c) Heroin
(d) Marijuana

5. What kind of photos does Yunior have of his father?
(a) Sepia photos
(b) Color photos
(c) Polaroids
(d) Black and white photos

1. Who kicks the two boys off the bus?

2. What was the name of the neighbor Yunior used to play with?

3. What is the title of the final section of the story?

4. What part of America do the family move to?

5. Who writes that he is coming home?

1. What happens to Papi when he drinks?

2. Why is Papi upset with the narrator?

3. How does Rafa treat his brother in the city?

4. How does Ysrael try to help the two boys?

5. How did Ysrael disfigure his face?

6. What does Papi tell Mami on the phone?

7. What homosexual experiences has Yunior had?

8. In what condition is the narrator's girlfriend?

9. Why is Mami afraid of living in her apartment?

10. How do the family react when Papi sends them a second letter saying he is coming home?

More summaries and resources for teaching or studying Drown.