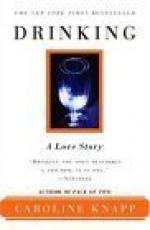 Caroline Knapp
This set of Lesson Plans consists of approximately 125 pages of tests, essay questions, lessons, and other teaching materials.

1. How hard was it for Knapp to quit drinking?
(a) The hardest thing she ever did.
(b) It was constant work, like being married.
(c) Surprisingly easy, after she committed to it.
(d) It easy for her to walk away from it.

2. What had Knapp done at night until she was sixteen, when she started drinking?
(a) Sleepwalk.
(b) Rock herself.
(c) Have nightmares.
(d) Cry.

3. What would Knapp do if she felt that she did not have enough in her glass?
(a) Pour out her drink and ask for another.
(b) Obsess about how to get more alcohol.
(c) Sleep with the bartender.
(d) Get belligerent.

4. What class of people does Knapp find at AA meetings?
(a) Heads of law firms and CEOs.
(b) Pilots and flight controllers.
(c) Poor and desperate people.
(d) Mentally ill people.

5. What was Knapp's relationship with alcohol like?
(a) On and off, and inconsistent.
(b) Brief and blissful.
(c) Long and tortured.
(d) Longstanding, methodically destructive.

1. Why would Knapp find it hard to have dinner with her boyfriend's parents?

2. Which friend of Knapp's had raging alcoholism in the family?

3. How old was Knapp when she fell in love with David?

4. How would Knapp spend her time during the first year of living alone?

5. Knapp was always careful not to be alone with which of her friends' fathers?

2. How does alcohol make Knapp feel while she is with her family?

3. Describe the event that got Knapp to quit drinking.

4. How would Knapp fill her days when she was living by herself?

5. What would happen when Knapp would wake at night when she was drinking?

6. How does Knapp strategize to hide her drinking at the end?

7. How does alcohol affect Knapp's relationship with David?

8. What does Knapp love about drinking?

10. What does Knapp do after David moves to Chicago?

More summaries and resources for teaching or studying Drinking: A Love Story.