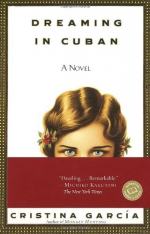 Cristina Garcia
This set of Lesson Plans consists of approximately 108 pages of tests, essay questions, lessons, and other teaching materials.

2. How do Celia's feelings change for Jorge in Ordinary Seductions: Celia's Letters: 1935-1940?
(a) She falls in love with him.
(b) She wants to start over with him.
(c) She starts to appreciate his sense of humor.
(d) She feels sorry for him.

3. Why does Lourdes fire her new employee?
(a) The woman lied on her resume.
(b) The woman steals from her.
(c) The woman has eyes for Rufino.
(d) The woman takes extremely long breaks.

4. What initially scares Luz and Milagro when they see their father?
(a) A ghost standing behind him.
(b) His looks.
(c) Disappointing their mother.
(d) A dog running toward them.

7. What does Celia do when she leaves the asylum?
(a) She sacrifices a goat.
(b) She buys a ticket to Spain.
(c) She vacations with her family.
(d) She looks for a job.

8. Who is Pilar able to communicate telepathically with?
(a) Her grandfather.
(b) Her boyfriend.
(c) Her grandmother.
(d) Her elderly neighbor.

10. Why is Hugo forced to marry Felicia?
(a) She is pregnant.
(b) He lost a bet.
(c) A santera tells him he will have bad luck if he refuses.
(d) It is an arranged marriage.

11. Why do Lourdes and Rufino originally leave Cuba?
(a) They want to escape soldiers.
(b) Lourdes wants to live some place cold.
(c) They are worried about the economy in Cuba.
(d) Rufino is offered a job elsewhere.

13. How does Celia describe the environment that her first child experiences in her womb?
(a) Lovely.
(b) Calm.
(c) Poison.
(d) Scared.

14. What does Celia agree to do if Gustavo does not respond to her letters?
(a) She must contact Gustavo's wife.
(b) She must visit Gustavo in person.
(c) She must let the santera set her up with someone new.
(d) She must marry Jorge.

1. Where does Pilar actually buy a ticket to?

2. Who does Ivanito most resemble?

3. Who does Celia remember, as a result of her son's birth?

4. Why does Celia feel Jorge betrays her?

5. Who arrives in Santa Teresa del Mar, screaming for Celia?