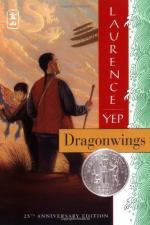 This character is strong, intelligent, and so considerate of his father that he lives in near exile for three years so that his father might live out his own dream.

This character had a dream that convinced him that he is a dragon being punished by living in a human's body.

This character came back to the Middle Kingdom for a time, but found it so different than his memories that he decided to go back to America.

This character is the senior partner in the Company, and he makes most of the decisions in regard to the partnerships and the safety of his people.

This character is no longer wealthy, so she must take in boarders to help make ends meet.

This character is a precocious child who quickly wins over a Chinese boy, and they...