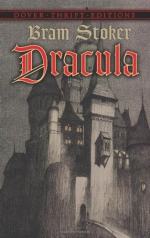 Bram Stoker
This set of Lesson Plans consists of approximately 150 pages of tests, essay questions, lessons, and other teaching materials.

1. Once the team learns that Dracula is back on land, how do Mina and Van Helsing plan to catch him?
(a) By horse and carriage.
(b) By steamboat.
(c) None of these answers is correct.
(d) By horseback.

2. What route does the team decide Dracula will take back to his home?
(a) The longest route so he can attack the most people on the ship.
(b) A route that the team would never suspect.
(c) The shortest route so he can get home faster.
(d) The same route he took to come to London.

3. What prized possession did Dracula destroy when he visited Seward's office?
(a) A very old and hold crucifix.
(b) The windows, protecting all of Seward's research from the rain.
(c) The manuscript the team had been working on.
(d) Pictures of Lucy before she died.

6. When does Mina end up reading Harker's diary?
(a) She never reads his diary.
(b) Just before Lucy dies.
(c) After Lucy dies.
(d) While Harker is still in a hospital in Budapest.

8. Despite his injuries, what does Renfield manage to tell the vampire-hunting team about Mina?
(a) That she has been kidnapped.
(b) That she fled in the night.
(c) That she was with Dracula.
(d) That she is dead.

9. What physical changes does Harker notice about Mina after she has been bitten?
(a) That she refuses to travel without her cape.
(b) That he fingernails are getting very, very long.
(c) That her lips are drawn and her teeth show prominently.
(d) That she only wants to wear black.

10. Where does the group finally learn the missing wooden boxes are located?
(a) On a ship in the harbor.
(b) Piccadilly.
(c) America.
(d) Transylvania.

11. What does Van Helsing flash at the Count to make him disappear while he is with Mina and Harker?
(a) A mirror.
(b) A holy wafer.
(c) A crucifix.
(d) Garlic.

12. Where do Harker and Mina stay while they are working with Seward in the asylum?
(a) In the church next door.
(b) They refuse to stay with Seward.
(c) In private quarters.
(d) They go undercover with the inmates.

13. What is Renfield and Mina's initial conversation like?
(a) Calm and reasoned.
(b) None of these answers is correct.
(c) Fun and relaxing.
(d) Crazed and scary.

14. After Dracula's ship departs, why does the team decide to keep Mina out of the loop about their plans?
(a) Because she may be a spy.
(b) Because she has shown herself to be untrustworthy.
(c) Because she is telepathically connected to the Count.
(d) Because she may flee and tell everyone.

15. What does Stoker say the vampire Lucy look like?
(a) Her arms look like "the scrawny limbs of a dead tree."
(b) Her eyes blaze with "unholy light."
(c) She resembles the "darkest of demons."
(d) Her hair "blows in the wind as if it were smoke."

1. In what form is Seward's diary recorded?

2. How many of the wooden boxes does the vampire-hunting team locate during their mission after Mina is attacked?

3. What does Holmwood offer Mina as thanks for her comfort during his grieving process?

4. How does Mina think Van Helsing can exploit her psychic connection to Dracula?

5. What does Seward conclude Renfield has a sense of assurance about, despite his wildly different moods and behaviors?