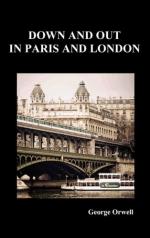 Down and Out in Paris and London Character Descriptions

George Orwell
This set of Lesson Plans consists of approximately 100 pages of tests, essay questions, lessons, and other teaching materials.

He is young, educated and capable, though he doesn't seem to work extra hard until he is forced to. He is critical of governments and religion but is open-minded when it comes to individual people.

An ex-officer in the Russian army, he is a large, manly man, now quite overweight from lack of exercise and poor nutrition. He is still good-looking, though, and thinks about women a great deal.

He is young and comes from a well-off family but has chosen to live among the shadiest of Paris' citizens. His family sends him money from time to time, and he lives off this money instead of working.

He is exceptionally clean and well dressed for a vagrant, spending more time and resources on his clothing than the others. He will not steal on matter of principle, as in when he finds a bottle...

More summaries and resources for teaching or studying Down and Out in Paris and London.

Down and Out in Paris and London from BookRags. (c)2021 BookRags, Inc. All rights reserved.