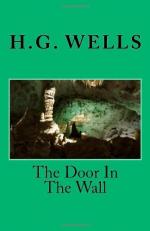 The Door in the Wall Short Essay - Answer Key

1. What makes Redmond believe Wallace's story when he first hears it?

When Redmond reflects back to the dinner he had with his friend, Wallace, he attributes the atmosphere for giving Wallace's story some veracity. He believes the story was given a certain glamour from the lights and the glasses, wrapping the story in a certain brightness.

2. What is Redmond's opinion of the story after he considers it in the light of morning?

After Redmond considers Wallace's story in the light of the next morning, he begins to doubt his friend's story. He thinks it's very likely that Wallace believes the story whole-heartedly, but that doesn't mean it's a true story.

3. What is Wallace haunted by?

Wallace told Redmond that he is a haunted man, but not by ghosts or apparitions. Wallace said he is haunted by something that filled him with longing and took all the joy out of life.

The Door in the Wall from BookRags. (c)2022 BookRags, Inc. All rights reserved.