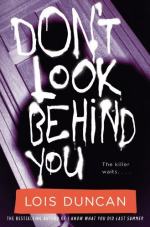 Lois Duncan
This set of Lesson Plans consists of approximately 156 pages of tests, essay questions, lessons, and other teaching materials.

1. Why does Larry phone April soon after they met?

2. A few days after arriving in Florida, April meets Abby again. Why is she in Grove City?

3. While in the hotel bedroom, April sees a phone. What does she plan to do?

4. Max finally shows up after Mrs. Corrigan calls him. What does he decide to do?

5. What is going to happen to April's family's dog, Porky?

1. Five days after their first meeting with the U.S. Marshal Rita Green, she comes back with their new identities. Where will the family be going and what will April's new identity be?

2. In Chapter 6, what does Max tell the family about what happened to Jim?

3. After the family learns of what happened to Mr. Corrigan at the trial, Max tells them they must go into hiding. What is the reaction of each of the family members?

4. While Jim is away from the hotel, someone comes to the door of the Corrigans' suite. Who is it and how does April react?

5. April eavesdrops on a phone conversation Jim is having with Max. What does she overhear?

6. After she is called to the counselor's office during her typing class, who does April see waiting for her? How does she react to this?

7. April thinks she will be home for Steve's graduation, but she is wrong. They stay at the Mayflower for two and a half weeks. How does each family member react to this prolonged stay?

8. After they arrive at the Mayflower, what restrictions does Jim put on the Corrigans?

9. After the family gets settled in Florida, life becomes dull. How do the Corrigans pass their time for the next three weeks?

10. In Chapter 1, the narrator, April, tells the reader about her world. What does she tell us about her family?

The protagonist of a story is not always portrayed in a completely positive light. In many novels, the protagonist makes a change or comes to a realization about some aspect of their life. April is in the process of growing up when she is yanked away from her almost picture-perfect life. How is the role of the protagonist portrayed in Don't Look Behind You? Give at least five examples from the novel that show how April changes over the course of the novel.

Define climax as part of the plot structure in literature. Where does the climax occur in Don't Look Behind You? What does it reveal about the purpose of the story?

Define resolution as part of the plot structure in literature. Describe where the resolution appears in Don't Look Behind You. Giving three detailed examples, show how earlier conflicts in the novel are resolved.