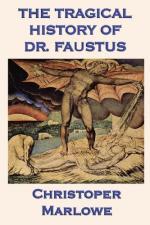 This quiz consists of 5 multiple choice and 5 short answer questions through Act 2, Scene 2.

3. Why is Wagner's first offer of payment so offensive to the Clown?
(a) It is not offensive.
(b) Because the Clown does not like Wagner.
(c) Because French crowns are devalued to the point of being practically worthless.
(d) Because Wagner refuses to pay at all.

4. Who does Faustus want to see to help him choose his course of studies?

5. What is Robin carrying?