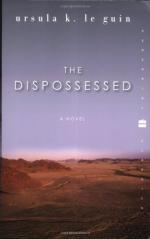 2. What does one man think the real Odonians will do to someone who leaves to go to Urras?
(a) Exact violence on them
(b) Put them on trial
(c) Worship them
(d) Imprison them

3. Why does Takver think Shevek will quickly garner support?
(a) People will be able to smell the freedom
(b) He has money
(c) He is a charismatic
(d) He is like a celebrity on Urras

4. What does Shevek do while waiting for Takver to finish her posting?
(a) Spends time with Sadik
(b) Watches films
(c) Begins to organize a revolution
(d) Writes a scientific paper

5. Why does Shevek want to give his theory to the Terrans?
(a) So they can solve the problems of poverty
(b) So they can legitimately declare war on the Urrastis
(c) So they can broadcast it to the rest of the planets
(d) So they can develop nuclear weapons

8. Where do the resistance group hold a rally?
(a) The city airport
(b) Capital Square
(c) Parliament Square
(d) Peace Square

9. Why does Shevek think that they have fewer choices?
(a) Society is becoming more bureaucratic
(b) Society is encouraging violence
(c) Shops and schools are closing down
(d) Authorities are oppressing new ideas

10. What has Shevek decided to set up?
(a) A hospital
(b) A rebel army
(c) A homeless shelter
(d) A printing syndicate

12. What do Bedap and Shevek start to implement?
(a) The Principles of Anarchy
(b) Democracy
(c) A revolution
(d) The Syndicate of Intiative

1. What name do Takver and Shevek give their daughter?

2. What time of year does Takver give birth to her daughter?

3. To where does Shevek temporarily escape?

4. What does Shevek say the change in society is going against?

5. What does Takver convince Shevek to do to get his paper published?

The Dispossessed from BookRags. (c)2021 BookRags, Inc. All rights reserved.