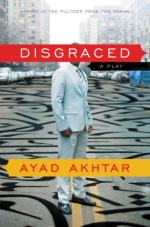 Ayad Akhtar
This set of Lesson Plans consists of approximately 127 pages of tests, essay questions, lessons, and other teaching materials.

1. What does Amir say he felt pride in, on 9/11/2001?
(a) That a great power was being laid low.
(b) That a cycle of violence would change the balance of power.
(c) That the underdog was winning.
(d) That an injustice was being corrected.

2. What punishment does Amir say the Quran specifies for people like him, who have renounced their faith?
(a) Death.
(b) Beheading.
(c) Exile.
(d) Imprisonment.

3. Why does Amir say he changed his name?
(a) His first marriage.
(b) Immigration to the U.S.
(c) Entering practice.
(d) Identity theft.

4. What kind of look does the playwright say Amir gives Emily’s portrait of him, as the play ends?
(a) Dejected.
(b) Searching.
(c) Miserable.
(d) Searing.

1. What does Amir propose to Jory in Scene Three?

2. How does Abe say that Muslims have been disgraced?

3. How does Amir characterize Islam to Isaac, when Emily and Jory go to prepare the salad?

4. What are Jory’s feelings about the Muslim veil?

5. How does Amir say Muslims react to the pain of living?

1. What happened at work that made Amir forget to get wine?

2. How does Emily compare the Renaissance in the West and Islamic culture?

3. What does Amir tell Emily he wants for her, at the end, and what is Emily’s response?

5. What does Emily mean when she says, in Scene 4, that her work was naïve?

6. What grounds has Akhtar left the audience, by the end of the play, for feeling that there is a path to virtue and integrity?

7. What historical circumstance complicates the question of Amir’s nationality?

8. What is the tone of the dinner party Amir and Emily host with Isaac and Jory?

10. What causes Amir to hit Emily?