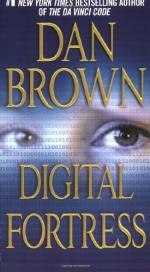 Dan Brown
This set of Lesson Plans consists of approximately 120 pages of tests, essay questions, lessons, and other teaching materials.

2. What is an anonymous server?
(a) it provides internet accountsq
(b) it allows for the dissemination of freeware
(c) it protects the identity of email users by being a middleman for email
(d) it allows people to post their opinions on various topices

3. What does Swathmore want from Hale?
(a) his resignation
(b) the pass key
(c) the money from the sale to the Japanese firm
(d) his email

4. When Susan and Swathmore are in Swathmore's office, what does he take out of his desk drawer?
(a) a knife
(b) a printout of the pass key
(c) a gun
(d) a letter from Tankado

6. What does Susan use to find the location of Tankado's partner's e-mail account?
(a) a tracer
(b) a supoena
(c) a wire tap
(d) the FBI

8. What do Midge Milken and Chad Brinkerhoff question?
(a) the zero codes broken figure
(b) the reliability of the data
(c) the possibility of a virus
(d) nothing

11. When Midge learns that it is possible to override Gauntlet, what does she plan to do?
(a) check the reports on the Director's computer to see if Swathmore bypassed the security filters
(b) talk to Swathmore
(c) nothing
(d) call Security

14. While trying to find the ring, what doesn't Becker realize?
(a) that he wont be paid
(b) that he is wasting his time
(c) that he is being followed by a man wearing wire rimmed glasses
(d) that he is under observation by the police

2. What were Tankado's plans for Digital Fortress?

3. Becker learns from Two-Tone that Megan is leaving for:

5. When Swathmore tells Phil Chartrukian to leave, he doesn't. Why does he stay to run more tests on TRANSLTR?

More summaries and resources for teaching or studying Digital Fortress.