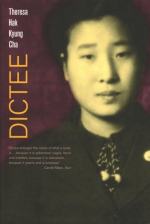 Bring in an Article

Find a newspaper article about Korean-Americans during Cha's life (1951-1982).

Interview with the Author

Imagine an interview with Cha. What would you ask her?

Stage a conversation between Cha and one of the women in the book. What would they say to each other?

Write a letter to one of the women photographed in Cha's book.

Create your own cover for Cha's book.

Pretend you are the French teacher in the book. Write an evaluation regarding the students' attitudes toward French.

Sketch one of the people who appears in the text but does not have a photograph.

Design an outfit that reflects one of the people in the text.

Analyze the handwriting on one of the letters in the...