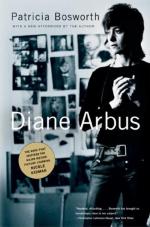 Patricia Bosworth
This set of Lesson Plans consists of approximately 104 pages of tests, essay questions, lessons, and other teaching materials.

2. What drew Diane to Grosz's work?
(a) His subtext.
(b) His controversy.
(c) His unusual subjects.
(d) His flashy tricks.

3. How did David and his brothers pay their rent?
(a) Washing cars.
(b) Selling postcards.
(c) Cleaning houses.
(d) Shining shoes.

4. What effect did Diane's risky behavior have on her work?
(a) It replaced her work.
(b) It inhibited her.
(c) It inspired her.
(d) It distracted her.

5. How did Diane meet Cheech McKenzie?
(a) She saw her in a Broadway show.
(b) She worked for Glamour.
(c) She interviewed to be a model.
(d) She was her neighbor.

1. Why did Howard work at Russek's?

2. How was Diane's work received when she first submitted her portfolio?

4. What made Diane jealous about Alex's and Jane's marriage?

5. Diane wanted to escape the _______ of commercial photography.

1. How did Diane's parents feel about her marrying Allan? Was she fulfilling their desires of letting them down?

2. How was Diane "the first paparazzi"? For her, was this a good title?

3. Why do you think Diane's work is more famous today than in the 60's?

4. Was Israel an appropriate mentor for Diane? Why did they develop a relationship?

5. Was Europe a positive experience for Diane? How?

6. What were Diane's choices of inspiration? How did those reflect her vision and tendency towards art?

7. What is the overall message about Diane from Bosworth's biography?

8. What was Robert Frank's image of "America"?

10. Why was Diane envious of Howard?

More summaries and resources for teaching or studying Diane Arbus: A Biography.