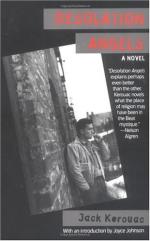 Jack Kerouac
This set of Lesson Plans consists of approximately 149 pages of tests, essay questions, lessons, and other teaching materials.

1. What does Jack enjoy most about his stay in Tangiers?
(a) The anonymity.
(b) The cheap opium.
(c) The creative bursts.
(d) The companionship.

3. What does Jack have to do before being admitted into London?
(a) Prove his American citizenship.
(b) Read some of his poetry.
(c) Have his rucksack searched.
(d) Pay an entrance fee.

1. What is Jack's nickname for Hubbard?

2. What is most shocking to Angie about Mexicans?

4. Where does Jack go to escape from his mother for a little bit while they are living together?

5. Where does Jack spend his last night in California before going back to Florida with his mother?

1. How does Hubbard survive in Tangiers with no real work?

2. What is Jack's response when Alyce asks to be allowed to go with him to Africa?

3. Why does Jack think childbirth is a disservice?

4. What does Angie do when she finds out that Ben is a Buddhist?

5. What causes Jack's disgust for the civilized world to increase while he is on the ship heading to Africa?

6. How does Jack describe his mother as he gets ready for his trip to California with her?

7. How does Irwin describe Hubbard?

8. How does Angie describe California after living there for a few weeks?

9. How does Jack describe Cody when he tries to retrieve some money lent to him?

More summaries and resources for teaching or studying Desolation Angels.