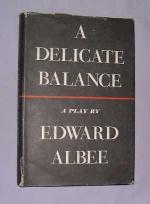 Edward Albee
This set of Lesson Plans consists of approximately 102 pages of tests, essay questions, lessons, and other teaching materials.

Edward Albee won the Pulitzer Prize for Drama in 1967 for A DELICATE BALANCE. Do some research on this prestigious award to see what impact Albee had on the world of drama.

Ask an accordion teacher to come to class to give some fundamental lessons to the students. If any of the students knows how to play already, ask him/her to play a song for Claire!

Do some research on the music of the 1960s--particularly cocktail jazz which would be playing in the background at Tobias and Agnes's home--and create a CD of downloaded songs to share with the class.

Imagine that you could have dinner with Edward Albee and some of the characters from the play. Where would you have...

A Delicate Balance: A Play from BookRags. (c)2023 BookRags, Inc. All rights reserved.