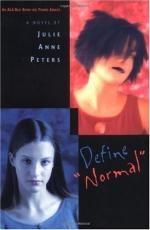 1. How did Jazz's friend commit suicide?
(a) He put his car into the river.
(b) He shot himself in the head.
(c) He cut his wrists.
(d) He strangled himself.

2. Chuckie is admitted to the hospital after throwing up on Antonia. What is his diagnosis?
(a) He had tonsilitis.
(b) He had pneumonia.
(c) He had a flu bug.
(d) He had food poisoning.

3. What does Antonia do before the Luthers take her out to dinner that so impresses Mrs. Luther?
(a) Antonia takes money out of her piggy bank so that she can offer to pay for her own dinner.
(b) Antonia dresses like Jazz so that people will think they are sisters.
(c) Antonia spends an hour making sure her make-up is perfect.
(d) Antonia changes into a sweater and skirt.

4. Why can Antonia not take a bus to get to her family when they are holed up after leaving home?
(a) Because it would cost almost $100 for that much bus fare.
(b) Because the city is under a curfew and no travel is allowed.
(c) Because it is nighttime, she would have to transfer twice, and it would take hours to get there.
(d) Because the buses do not run at night.

5. What does Ram look like?
(a) Ram has a shaved head and tattoos all over his neck.
(b) Ram has orange spikes in his hair and a nose ring.
(c) Ram has big holes in his ears and a dozen piercings in his eyebrows.
(d) Ram is clean-cut with blond hair and blue eyes.

1. What grade does Antonia receive on her Algebra test?

2. What is the name of the bar near where Antonia's family has stopped?

3. What does Jazz theorize happened to Shelley?

4. Where is the piano that Jazz and Antonia are allowed to use?

5. Antonia understands that Jazz cannot give into her mother because Jazz has what character traits?