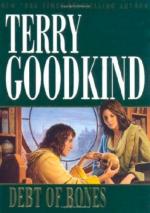 Terry Goodkind
This set of Lesson Plans consists of approximately 109 pages of tests, essay questions, lessons, and other teaching materials.

4. What is the first word that Mord-Sith utters after she is confessed by the Mother Confessor?
(a) Mother.
(b) Your grace.
(c) Master.
(d) Mistress.

6. What were the color of the eyes which looked back at her when Abby was pulled from the fight with the Mord-Sith?
(a) Brown.
(b) Violet.
(c) Blue.
(d) Green.

13. What does Abby say is just a few minutes from the home where they are standing after Zedd asks for its location?
(a) Council building.
(b) River.
(c) Town square.
(d) Church.

1. Zedd tells the others that those who do not want to live with magic should move to the _________ where they shall be protected.

2. What does Zedd put into Abby's hands as he looks at Abby and holds onto her bracelet for a moment?

3. Zedd says that the life _______ of he and Abby have intersected, so she may call him by his name from that point on.

4. Who does Abby try to stay away from when she is walking through the camp to find her daughter, while dressed as a Mord-Sith?