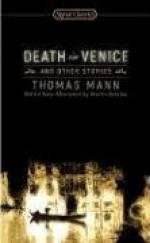 Thomas Mann
This set of Lesson Plans consists of approximately 116 pages of tests, essay questions, lessons, and other teaching materials.

Cemetery Traveler - This character is a foreigner in the cemetery and carries a rucksack and a walking stick.

Gondolier - This blonde-haired character dresses in brightly colored clothes, has a criminal record, and acts suspiciously.

Old Fop - This character appears on the steamer to Italy, and wears make-up and false teeth to appear young.

Street Performer - This character carries the smell of carbolic acid that authorities are using to disinfect Venice and appears to be foreign.

Tadzio - This character is on vacation in Venice and resembles some of the Greek statues.

Tadzio's Sisters - This character represents the qualities that von Aschenbach prized during his life, but they are not appealing aesthetically or sexually.

Gustav von Aschenbach - This character is a middle-aged sickly person who works as a writer in Germany.

Yashu - This character has dark hair, masculine features and...

More summaries and resources for teaching or studying Death in Venice.