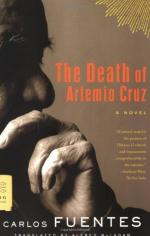 Carlos Fuentes
This set of Lesson Plans consists of approximately 94 pages of tests, essay questions, lessons, and other teaching materials.

2. Catalina and Don Gamaliel had agreed that:
(a) Luise would live with them
(b) Catalina would not marry
(c) Don Gamaliel would sell his estate
(d) they would not discuss Gonzalo's wife and son

3. Don Gamaliel's debtors:
(a) are suing him
(b) have threatened to kill him
(c) have paid him fully
(d) don't want to pay him

4. When the priest comes to Cruz, he says that he:
(a) wants to make his last confession
(b) is dying
(c) has survived
(d) is in a lot of pain

5. The plane flight Cruz thinks of is to:
(a) Acapulco
(b) Hermosillo
(c) Mexico City
(d) Monterey

1. Who does Artemio see at the church?

2. At lunch, the two women try to pronounce the name of:

3. When the revolutionaries charge, Cruz:

4. Who tries to show affection for Cruz by caressing him?

5. Cruz lies there thinking about:

1. Why does the police commander have Cruz brought to Saturno's?

2. What does the chauffeur think while sitting in traffic?

3. What are Teresa and Catalina upset about in Artemio's hospital room?

4. What is the first thing that Cruz is aware of as he wakes up?

6. What is Cruz thinking while the police commander is playing Russian Roulette?

7. What do the girl and her mother talk about at the dress shop?

8. Who does Cruz see when he first opens his eyes?

9. What does Catalina tell Artemio about what happened before they were married?

10. How does Major Gavilan feel that Cruz will be received by the general?

More summaries and resources for teaching or studying The Death of Artemio Cruz.

The Death of Artemio Cruz from BookRags. (c)2020 BookRags, Inc. All rights reserved.