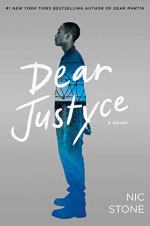 Nic Stone
This set of Lesson Plans consists of approximately 132 pages of tests, essay questions, lessons, and other teaching materials.

1. In Chapter 4, how old was Quan when he was arrested for the first time?

2. What movie was Quan watching the night his father was arrested?

3. In Chapter 4, what was the name of the kid at Quan's school who got expelled for screaming, cussing, flipping tables, and swinging at teachers?

4. Where did Dwight find some money that Quan's mother had hidden in Chapter 3?

1. What is Trish's relationship with her sister Tiff and her family?

2. What does Quan remember in Chapter 2 about stealing a cell phone?

4. In Chapter 3, how long had it been since Trish worked and why?

6. What does Quan know about Aunt Tiff and her husband's financial situation?

7. What was Quan's favorite spot at the Wynwood Heights Park in 2010?

8. How has Liberty Ayers turned her life around?

9. In Chapter 2, what does Quan thank Justyce for sending him?

10. In Chapter 4, why does Quan not tell someone about the violence Dwight inflicts on his mother and how he treats the kids?

Out of loyalty, Quan does not testify against Martel or his boys. Why does Quan feel loyalty to Martel and his boys? Why is he concerned about being loyal to them and associating with them when he is released? How does his sense of loyalty lead to an internal conflict for him?

More summaries and resources for teaching or studying Dear Justyce.